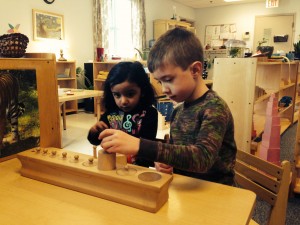 Recently, a new parent visited one of our primary classrooms with her three-year-old daughter.  We were welcomed into the room by two students who introduced themselves and asked the little girl and mother for their names.  As we moved in from the doorway, our little visitor’s attention turned toward the the practical life work and she quickly made her way to these engaging materials.  She surveyed some of the work, gently touching the pieces and inspecting them closely.  Her mother and I quietly began to move away to avoid disruption of the child’s experience.  She selected transferring work and began, as many children do, to experiment with the work right there on the shelf.   An older child who is in his third year at MAB, approached her and explained that she should take the work to a table.  This is how each lesson begins so that there is a definite start and finish to the work.  “Do you want me to show you how to do that?” he asked.  The little girl nodded.  The boy brought the work to the table and invited the child to sit down.  He knelt next to her and demonstrated, without speaking, the three-finger pincer grasp before picking up the spoon.  He then carefully, deliberately transferred each bean from one dish to the other as the child patiently watched with interest.  When he finished, he said “Now it’s your turn” and placed the spoon back on the tray.  The three-year-old eagerly began working and the older boy moved on to another task.

Later, the visiting child received a lesson from the teacher on the first cylinder block.  This work is one of 4 blocks of wood each with 10 knobbed cylinders which decrease in height and/or diameter.  I have mentioned this work before on this blog because I believe it is one of the most complete examples of the quintessential Montessori material.  It is one of the earlier sensorial materials to be introduced to the child but the presentation is painstakingly slow and fairly long.  The work is also self correcting, so most children would be able to successfully complete it without any instruction from the teacher.  The reasons for the presentation are to demonstrate use of the pincer grip, gradation of size, to ensure proper use of the material and to help the child build patience and problem solving skills.

After the lesson, the child was able to work on her own.  As we observed from afar, she successfully removed and replaced each of the cylinders just as she had been shown and we could see the pleasure in her eyes at her own success.  She decided to repeat her work but this time encountered a challenge.  The older boy had come over to check on her and he noticed that she had placed some cylinders in the wrong holes and seemed to need assistance.  The parent and I watched as he asked if he could help and then replaced the cylinders in their appropriate spaces.  At that moment, I was a little disappointed because I knew the self-corrective nature of the work would have allowed the little girl to eventually find the problem and solve it on her own.  However, what happened next was nothing short of magnificent.  The boy carefully removed the largest cylinder and traced the circumference of the aperture with his finger, then he traced the circumference of the cylinder’s base to show they matched. He then slowly, delicately, slid the cylinder into the space and nodded his head to show it was correct.  He repeated this for all ten cylinders while the little girl watched.  As this was happening,  just behind us, another little girl was giving a lesson on the trinomial cube -one of the more difficult sensorial materials, to another child.  As she built each layer of the cube in it’s box, her friend was so fixed on her work that she hardly looked up until the lesson had been completed.  In fact, as we looked around all the children were working individually or collaborating, paying almost no attention to the adults in the room.

The teacher was barely involved in the actual moment, but long before that moment could occur the way it did, the teacher had to do something very important that only happens in a Montessori environment.  She had to relinquish her control of the room to the children.  This is a monumental task for any adult and it must be done in a way that ensures a balance between teacher responsibility and child responsibility.  If it is done correctly, the children teach and learn from each other organically, spontaneously, instinctively, just as we observed on this day.  Moments like this demonstrate time and again that for all their considerable abilities, perhaps the thing that makes Montessori teachers truly great is that they know the best teachers in the room are the children.