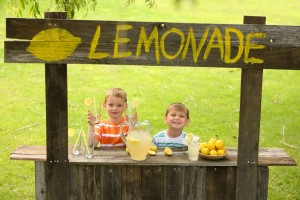 I’m not really sure where it comes from, but even going back to my own youth, it seems so many children are naturally interested in commerce. Drive through any neighborhood in Loudoun County on a hot Summer day and you’re likely to see at least one lemonade stand. I’ve seen prices varying from 25 cents a cup to a dollar. My eight year old son would setup and man his lemonade stand everyday if he could. In fact, he’s tried to sell just about everything he has ever found in bulk at one time or another from sea glass and animal bones to mulberries and interesting rocks. With the exception of some of the stranger items he’s come up with, I’m very much in favor of the idea of children producing/collecting and selling goods or services, but recently I encountered an internal conundrum. Well, that’s over-dramatizing it a bit. It was more of a mental excursion into my own parenting philosophy.

Last April, in a very impulsive move, I purchased six Rhode Island Red hens for a dollar a-piece from the Tractor Supply store. They put what seems like a thousand of these cute, fuzzy, chirpy, little puff balls right in the middle of the store under a big sign that says “Chicks $1 each (minimum 6).” How could I afford NOT to buy them? So I renovated an old shed on my land and made it into a pretty nice coop. About a month ago, the hens started laying eggs. First two-a-day, then three. Now we are up to four eggs-a-day. What should we do with all these eggs? I asked the kids. Naturally, my two oldest said “Let’s sell them!” So the idea for an egg stand was put forth.

We discussed price and determined that we should try to make enough each month to cover our feed costs. We could charge a little more than store-bought eggs because these are straight from the chicken and we could deliver them to our neighbors rather than making people come to us. We also didn’t want to gouge our neighbors so we decided that $2 for six eggs was the right price.

Then I had another thought. Well, actually my Montessori teacher wife and one of the most generous people I know had the thought.

Why not give them away for free? I mean, we are going to care for these hens regardless of what becomes of their eggs and we don’t need the extra few dollars to cover our costs. Plus, these are our neighbors after all and while they would certainly invest $2 a week in our children’s project, it’s way more neighborly to share what we have without asking for anything in return. There was a time when this kind of behavior was expected among neighbors. I like to think that in the very small towns across this nation, it still is.

My children participate in charity events, they raise funds for those in need. We bring food and clothing to the homeless shelter and we are always mindful of those who might need our help. But like many in Loudoun County, my children have always had their needs met and many of their wants as well. Between birthdays, holidays and the general daily life of growing children, they spend considerably more time receiving than giving.

So I imagined the scenarios on both sides -selling versus giving, weighing pros and cons. If they sell the eggs they’ll learn math skills, budgeting and they will gain experience in managing money, I thought. They’ll experiment with supply and demand and see the results of their labor. They’ll gain confidence from the customer sales aspect of it and the reward of producing a good and providing a service. They will engage with the neighbors in a new way. They may even stumble upon a new mentor or friend in the process.

If they give the eggs away, they lose the money experience but not much else. Now let’s talk about what they might gain. To me, the financial transaction is very closed-ended. “Here are your eggs.” “Here’s your money.” Where do you go from there? However, when you give something to someone freely, there is a different relationship. There is an emotional connection. You share not only the gift, but a little bit of yourself as well. You share gratitude, respect and appreciation for each other as human beings. What you get in return for giving cannot be held in your hand. It cannot be bought, but it is yours all the same. That makes it priceless.

There is mounting evidence that helping others leads to a happier and even healthier life. For many, this is a generally accepted fact. Giving also helps to develop a purpose and a meaning in life. There can be multiple reasons for giving and while the most noble is to help another person, there is nothing wrong with acknowledging that when we help others, we help ourselves. Besides, the pursuit of expanding one’s spirit of generosity, is always worthwhile.

We had already discussed the idea of charging money for the eggs, so I asked my children to choose between the two options. In hindsight, the way I pitched the notion of giving the eggs away made it virtually impossible for them to choose selling them. But as much as I try to avoid overly influencing children, some ideas must start with the adult. So off we go again into the rewarding world of philanthropy.

Now you can see why this isn’t a conundrum at all. It’s win-win, really. In the end, there is much to be learned from both experiences. Financial acumen and altruism do not have to be mutually exclusive. If we do it right, our children will get enough experience to see the value in both. Summer is over for now, and while the kids are excited about our free egg delivery service, drive by my house sometime next July and you can bet my kids will be out in front selling Lemonade again.