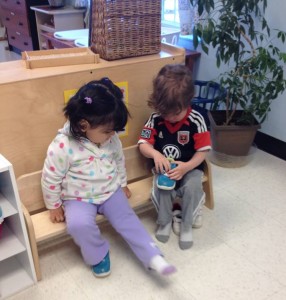 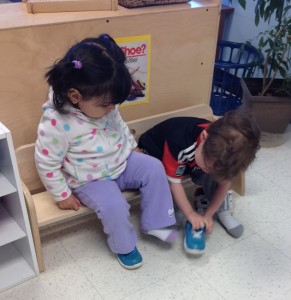 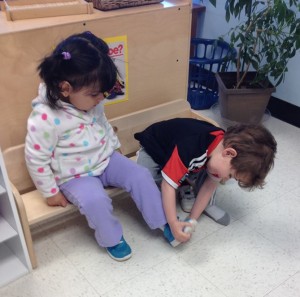 This question was recently posed to me by a father. Last year was his child’s first in Montessori. He told me that it took some time and effort to “figure it out.” They attended classroom events, observed the room and spent time learning about the materials and philosophy with the teacher. They loved what they had seen. By mid-year they reached a point where they began to understand and apply at home some of what they saw their son doing in the classroom. At the end of the school year, they were delighted to see all of the progress their son had made. Now “What can I expect this year? How will it be different?” He said.

This is an excellent question. I suspect that most parents are beginning to wonder the same things right about now. Children cover so much ground in these early years that regardless of the child’s age, it is an absolute certainty that this year will be different from the previous year. But how?

Clearly a detailed, child-specific answer has to start with “If.” IF your child is a two year old boy, his year will likely be very different from that of a 4 year old girl. If last year, your child began to solidify the skills of patience, concentration and self-reliance, her year will be different from a child who has not yet developed these skills. The short answer, therefore, is that whether this is the first year of Montessori or the 6th, your child will pickup where he or she left off. He or she is not limited by the age or abilities of the rest of the class. He will not have to wait for them to catch up and she will not be pushed into work that is beyond her grasp. There may be some Summer regression. Some things may need to be re-introduced, but the skills your child will develop this year will be based upon the skills with which he or she enters our class on September 3rd.

Montessori has been around for more than 100 years. It is based upon the science and theory of human development (some of this science is only just now catching up with Dr. Montessori’s theories). So even without the “If” we are able to point to some common themes of a child’s year-to-year development.

There is a distinct difference between the development which occurs during the first half of the first plane of development and the second half. There is also quite a bit of information to be shared regarding each of these periods. So I have broken this post into two parts. Each part covers three of the first six years of life. This one covers zero to three. If your child is older than that, feel free to skip to part II. You can always come back to part I when you have time.

Age Zero – 16 months (first year):
Joy. That’s the best word to describe the first year of life. There may be no better experience than witnessing the pure joy of a young child. It’s also a period of intense work for parent and child. At times things may seem to move slowly during this period, but make no mistake, things are happening very quickly inside your child. When evidence reveals itself, you may find yourself wondering how your child could possibly have gotten this far.

The first year of life is hallmarked by major physical development – the most drastic in all of life. It is through the physical development that the child begins to demonstrate independence: sleeping consistently, rolling over, sitting up, crawling, walking, feeding one’s self, pincer grasping, carrying objects, and other basic skills allow the child to make and act on decisions as options for exploration grow. Emotions begin to become more predictable as the child begins to learn her own likes and dislikes. Those opinions become obvious to the parent, even without words. Inside, cognitive language is exploding while expressive language may only become evident in the final months of this period. Innate personality traits also begin to reveal themselves as the child gradually turns from infant to toddler. The child’s brain, at first primitive and new, is building connections between neurons at an incredible rate. It fully absorbs the sounds and sights of its surroundings.

How this looks at home: Consistency is very important as the child’s sense of order will often dictate. Parents should work to develop routine and the child will adopt a schedule which is partially based on home as well as the other children in the school environment. With increased mobility, he or she will begin exploring the home environment and will demonstrate new interest in self-care -especially feeding. Dr. Montessori observed that “the hands are the prehensile tools of the mind.” As the hands strengthen, they become the primary means through which the child experiences the world. Parents should design the home environment with this fact in mind, providing opportunities for independent exploration such as graspable items with differing weights, shapes, colors and textures.

The child may or may not develop a longer attention span for home activities such as playing independently or sharing a book with a parent. His or her bedroom can represent a great haven for safe, targeted, independent exploration. Wherever possible, the child should be given as much freedom of movement as possible. A movement area should be available to the child even before he or she can roll over. A mirror placed at the base of the wall near the floor gives the child time to inspect his own body and movements. If the child is in his own bedroom, it should be free from clutter with limited decorations placed or hung low to the ground and in the child’s field a view.

The range for “normal” achievement of various benchmarks such as walking, talking and the all-important “sleeping through the night” can be extremely broad. Even among siblings it is common to see one child begin walking before 12 months of age and the other take his first steps at 15 months. One child may begin speaking at 13 months and another not before 2 years old. Parents can avoid unnecessary worry by treating siblings as completely different individuals.

A well-trained Montessori infant teacher will be able to anticipate and explain what comes next at any given point. She will quickly ascertain your child’s unique needs and help you to support her growth at home.

Age 16 months to 3 years (second/third year):
For these and all future years, the degree to which a child develops any skill depends upon the experience and mastery of related, building-block skills in the previous year. The child’s brain and psychological development are progressing rapidly. In this time span, children move from primarily egocentric thought and action, to recognition of and increased connection with others and their environment. Therefore, during this time, the Montessori method focuses on the development of social and emotional skills as well as executive functioning and the character traits needed to be a member of a community and ultimately a society.

We accomplish this through spontaneous and choreographed teacher/child interaction, peer interaction and via the didactic Montessori materials. Elements that appeal to children such as water, small objects, cleaning and sorting, are imbedded into the work. Children choose their work spontaneously and will repeat their efforts many times until they feel they have mastered the skill. They begin to learn to choose appropriate work, complete it and return it to its place for a classmate to use. They learn to solve problems and care for their environment, their peers and themselves. This creates a connection to the world around them and provides ownership and a sense of purpose and responsibility.

Academics are presented to the child indirectly. Language is developed through conversation, labeling/naming familiar objects, matching pictures to objects, singing, rhyming and story-telling. Fine motor development, particularly the pincer-grip, which is used to hold a pencil, grows with each exposure to the materials. Gradation, a crucial part of math, is introduced through materials which increase and decrease uniformly in size, shape and quantity. This period represents the end of the first three-year cycle. At this point, the child possesses the internal skills to thrive in the primary environment.

How this looks at home: Because the child has increased control over and input in his daily activities in the classroom, he or she may seek this out at home. Control of error is important when providing opportunities for independence at home. Parents will be able to give the child more physical space and direct intervention should become less necessary as the child has the desire to solve his own problems. In fact, this desire may be so strong that children may become upset when parents attempt to intervene. Over stimulation can also happen quickly so toys and activities which move rapidly, involve multiple pieces or provide passive engagement without child-directed activity should be avoided. Electronics and particularly screen time should be extremely limited.

Because they have been making choices each day and learning their roles and responsibilities in their environments, children can now respond better (but inconsistently) to reason and should be given choices where parent-initiated discipline is needed. Redirection may still be the best choice in cases where the child has reached a point of emotional frustration or anger. Parents should take opportunities to model and explain the impact of one’s actions on others. Children will require and should be given ample time, not just to make decisions, but to refine their own abilities and learn from their environment. When a parent’s patience is tested, it can be helpful to remind one’s self that a child’s brain lacks the mechanism for consistent reasoning and self-regulation. It will be 20 years before his frontal lobe develops enough for that.

We have now reached the midway point of the first plane of development. Your child should feel safe, comfortable and confident in your unconditional love. In three years, she has gone from a completely dependent infant who barely can control her own body, to a child who can return home from school, hang her coat and backpack, serve herself a drink of water and a snack and eat it at her own table, discard leftovers in the trash and place the dish into the washer, cleanup the table and any spills on the floor, push in her chair and go about the rest of her day. She can do all of this with minimal to no intervention from the parent.

Of course, this is a fairly specific example. One of many. I could just as easily have written about your child’s ability to empathize and relate to his friends as in the pictures above, where Robin helps Daniela put on her shoes. These actions, however, are not the goals of Montessori but rather by-products of the method. They are the external manifestation of the child’s (and your) efforts and independence is its own reward.

Let’s not forget the parent’s experience. In this time span, you have gone from novice parent to expert. Things that only a year or two ago you might never have seen coming, are now old-hat. You know everything there is to know about your child. You can change a diaper and eat a slice of pizza at the same time and you’re able to foresee and prepare for what lies ahead in your child’s day-to-day life as well as his immediate future. With some effort you have learned how to walk the line between help and hindrance and the results of your hard work are apparent in your own confidence as well as your child’s. Most importantly, you take the time to really consider what is going on inside that little heart and mind and recognize the pure joy that lies within your child. You are a Montessori parent of a Montessori child. Now get ready for some big changes in part II.