From birth through adulthood, there are so many things that children must learn along the way.  How can any education program find a way to cover them all?  Well, the fact is, if you’re trying to teach them all, one at-a-time, it can’t be done.  There just aren’t enough hours in the day, let alone a school day.  Teachers in traditional education are fighting against the clock every minute of the day.  The response from our educational leaders has been to fast-track concepts, spend less time on each new lesson, gloss over others and cut whatever else isn’t on “the test” from the entire curriculum.   Not surprisingly, this has created a trickle-down situation for parents across the nation, who have come to expect that if they want their children to learn the things that school has forgotten, it’s up to them to do it at home.  It’s been going on so long, we don’t even stop to think about why this has to be.

Addition, multiplication, subtraction, division, decimals, fractions, geometry, algebra, hand-writing, sight words, phonetics, encoding, decoding, parts of speech, punctuation, compound words, synonyms, sentence structure, spelling, social studies, government, economics, geography, longitude, latitude, ancient civilizations, historical events, botany, zoology, biology, chemistry, physics.  This list could continue for pages and pages without even getting into developmental, social and emotional skills like concentration, patience, persistence, focus, problem solving, empathy, divergent thinking, confidence, self-reliance and the things that are so often cut from programs like art, poetry and music.  Granted, all of these concepts are not learned in a single year, but each child is going to grasp them in his or her own way at different times and not until they are good and ready to do so.  Given that, how can anyone expect a teacher to successfully help each child to grow by giving everyone the same lesson at the same time?  To make the question more technical, even if children are given the lessons individually, how can a teacher possibly cover all of this when the children learn one thing from each lesson?  The answer is they can’t and they don’t.  Sadly, until we start expecting more from education and looking at things from the child’s perspective, things will only get worse.

Dr. Montessori has shown there is another way.  She knew it 100 years ago.  I may say this about each of the Montessori differences covered in this little series, but of them all, cosmic learning may be the biggest reason to choose Montessori for your child.  “Cosmic Learning” refers to the interconnectedness of all things in the universe.  If you look hard enough those connections begin to reveal themselves.   The practical application of this concept, put in layman’s terms, is the idea that multiple things can be learned from a single experience.

I recently observed an elementary classroom at a Montessori school in Florida. Shortly after I sat down a child walked past me on his way to return one of the puzzle maps to the rack (these are fairly large 24” x 18” wooden maps representing each of the continents and hemispheres of the globe). Without noticing, he dropped one of the pieces as he passed. It bounced and landed at my feet.  As an observer of a Montessori classroom, it is important to remain as invisible as possible, so I did nothing.

About 5 minutes later, a little girl walked by and noticed the piece on the ground. She picked it up and immediately began looking around this very large room in search of the correct puzzle. This continued for a few minutes as the child stopped by each puzzle she saw. South America? Nope. Asia? Nope. United States of America? Nope. Eventually, she passed another student who asked what she was doing. “I found this piece on the ground and I’m looking for the map that goes with it.” She said. “Let me see” said the other child. She inspected the piece and said “That’s Liberia. It’s in Africa.” She gave the piece back to the little girl who thanked her, replaced the piece in the Africa map and returned to her work.

Now, I’m not saying that this only happens in a Montessori classroom, but I am saying that it happens in every Montessori classroom.  I’m also saying that in the Montessori classroom, this doesn’t happen by accident.   It’s cosmic learning at its best, but if you’re not looking for it, it is easy to miss.  Let’s analyze what happened and how.  When this child saw the puzzle piece on the floor, she had multiple options; ignore it because it’s not her problem, tell a teacher, or pick it up herself and put it where it belongs.  At six years old, having spent several years in the Montessori environment, there was almost no chance that she would choose the first two options.  Still, if she hadn’t chosen to take action, I can almost guarantee that one of the other students would have.  During her years in Montessori, this child has worked to develop an understanding of her responsibility to herself, her peers and the environment.  She has internalized these concepts to the point of ownership.  She and all of her classmates own equal parts of everything in the room.  That’s apparent from the moment you walk through the door.  It is a child’s place.  It’s their place.  There is nothing that she owns more or less than anyone else.  It has been this way all along, but at six years old, she may only just have come to consciously realize this.

Once she started her search for the missing puzzle map, she had made the decision to solve the problem.  When she encountered difficulty, she might have considered giving up.  Then again, the idea may never have crossed her mind.  In either case, she showed persistence.   Her classmate, who was doing her own work, has also developed ownership along with empathy for her classmate.  Because she is given the opportunity for collaboration so often, it was instinctual to offer help.  In the process of collaboration, she also shared her knowledge of geography.  One of the more subtle points of interest here is the fact that the helping child stopped short of solving the problem for her friend and instead, returned the piece to her and continued with her own work.  She knows when she should lead and when to empower others.  When the child finally located the correct map, she didn’t seek any reward or praise.  She paused briefly to consider her success, and then found another work for herself.

Be honest, when you first read the story, did you see everything that really happened there?  Did you see ownership, persistence, concentration, empathy, responsibility, academic learning, self-motivation, confidence, leadership, collaboration and friendship?  If you’re cynical like me, you probably thought, “big deal, the kid put away a puzzle piece.”  You’re not wrong.  You’re just missing the big (or small) picture.

This sounds like an accidental occurrence and certainly, it was not planned by anyone -not specifically anyway.  However, the experience was an intended one and in order for it to happen, the environment, the students and the teacher all required preparation long before-hand.  Where, exactly, was the teacher in all of this?  As is so often the case in Montessori, she wasn’t directly involved at all.  She was on the floor working with another student.  She noticed the child walking around the room, but she did not interrupt her.  Instead, she observed and allowed the child the independent experience.  She did this because she believes -no, she knows, that if left to her own devices in the Montessori classroom, a child will learn.  Most of that learning happens when the adults set the stage and get out of the way.

Now let’s look at the Montessori materials themselves.  Last week I observed a child working with the constructive triangles.  These are wooden boxes which contain triangles of various shapes, obtuse, isosceles, equilateral, right and acute triangles.  The triangles are color-coded and when placed together correctly, they form larger triangles (or other shapes).  Each triangle has a pronounced black line on one or more edges which designates a connection point to one or more triangles of the same color.  When each triangle is complete, the lines identify the smaller triangles within the shape.  A solid shape colored gray is there as a template for checking one’s work.  It looks like this: 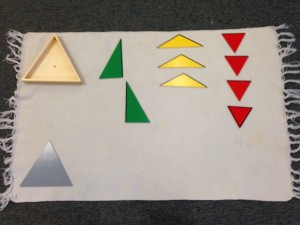 I watched as the teacher presented the lesson.  She was completely silent.  The work is self-explanatory -no need to talk.  Her movements were slow, deliberate and smooth.  The child paid close attention as the teacher traced each black line with her finger before sliding the triangle into position.  The final triangle is composed of 4 equilateral triangles.  The center triangle is black on all three edges and must be pointed downward in order to create a larger triangle that points upward.

Over the next 10 minutes, this child, who was new to the classroom this year, repeatedly struggled with the final triangle.  Each time she was excruciatingly close to success, but at the last second, seeing the other triangles pointed upward, she turned the small, center triangle pointing upward as well.  When she connected two more equilateral triangles, she formed a trapezoid with the small side pointing down.  Placing the final, fourth triangle on top, pointing upward, resulted in a shape similar to a paper sailboat.

At one point, the child appeared as if she was going to give up and put the work away.  She stopped what she was doing and looked at me.  I responded with an ecouraging shoulder shrug conveying the message “What can you do about this?”  She made eye contact with the teacher sitting nearby who sort of raised her eyebrows and nodded her head as if to say “You can do this.”  The child returned to her work and after another minute or so, she completed the final triangle.

I was expecting elation.  I myself, was smiling ear to ear.  Given her effort, I thought she might go to the teacher or a friend for some kind of acknowledgement.  Instead, she  immediately used the grey template to check her work.  Confident that each triangle was correct, she paused for only a moment to survey what she had done, and then she replaced all of the triangles in the box, one-by-one, returned the work to its place on the shelf and sat down with a friend to enjoy snack.

Thinking about the first story, what did you see here?  If you said, persistence, geometry, self-reliance, concentration, fine motor development and sense of order, you’ll get no gold star from me, but you should be proud of yourself.  You saw the connections.  You saw Montessori.  You know those posters which, if you stare at them long enough and sort of “look through” the pattern, a hidden image like a pirate ship or an airplane emerges seemingly from thin air?  The first time you tried it, maybe you weren’t successful.  Maybe it took you years to figure it out, but once you got it, you’ll never miss it again.  Observing cosmic learning is the same thing.   Once you know what to look for, you can’t help but see it.