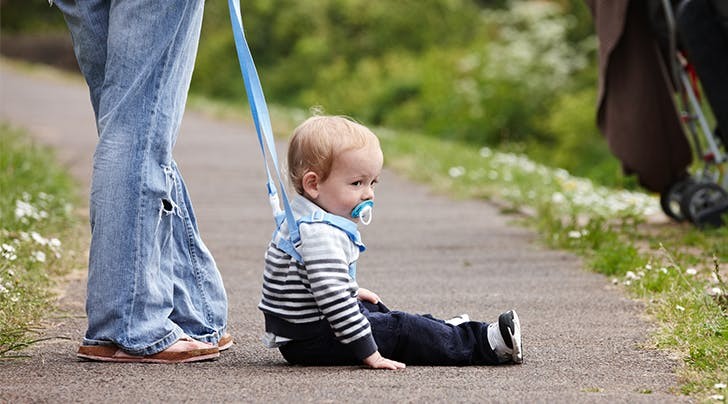 If you’re a parent, no matter how old your child is, chances are you’ve imagined an older version. The younger the child, the more varied the possibilities. Regardless of all the variables, most of us imagine a more independent and responsible future child than the one we know right now. It is a relative certainty of parenting that as the child grows, his or her responsibility will also grow and just as importantly, yours will dimminish. However, a child’s responsibility for himself is not based upon developmental milestones or accomplishments. It is only loosely associated with age and time. The real differentiator is control and the trick of parenting is recognizing all the little opportunities we have to keep it in balance.

Not too long ago, a young mother brought her 2 year old son into school for an introductory visit. Just before we began to walk down the hallway, the mother attached a leash to the child’s teddy bear backpack. As soon as he heard the click of the fastener, the child immediately began pulling on the leash, nearly dragging his mother along behind him. She pulled back on the line as if she was attempting to boat a 600 pound marlin. I noted that the school doors were secure so she could allow him to explore without the restraint. With concern, she said “But he’ll run away.” I added that he is welcome to visit any classroom and explore the building.

Reluctantly, mom dropped the leash. As she predicted, her son immediately, gleefully sped away. After about 20 feet, he stopped, turned and looked at mom as if to say “Aren’t you coming after me?” I put my hand on mom’s shoulder and asked her to remain with me. Her son beckoned her, but mom uneasily stood her ground. Then, in a very literal search for control, he picked up his leash, walked back to mom and put it in her hand. Neither mom nor I expected that. So his mother held the leash and the child started pulling again. I asked her to let it go and her son picked it up and tried to give it to her again. At this point, Mom removed the backpack and the child entered the room. For the next 30 minutes, the child worked and played independently, but never ran. This parent never used the leash again.

Granted, this is an extreme example since most parents understand the drawbacks of a leash. Anyone who has walked a dog knows that the question of who is leading whom is sometimes difficult to answer. Never the less, this little anecdote is an excellent representation of how deceptively difficult it is to balance parent and child responsibility.

Before we go any further, let’s agree on the following fundamental tenants of the parent/child balance:

The fact is that most parent/child conflicts are greatly influenced by an imbalance of responsibility. We tend to view these little (or big) battles in isolation. The major ones like sleeping, eating, toilet training, emotional outbursts, following directions, daily schedule/routine often dominate parenting brain space. Volumes of books dissect each issue on an a-la-carte basis and offer fool-proof parenting techniques. However, ignoring that they are all tied together through the ebb and flow of control, makes success in any one of them more about luck and coincidence than about solid parenting.

“The good news is that children are not masterminding a sinister plot to rise up against parent oppression…They simply seek balance and so do we.”

It feels uncomfortable, accusatory, maybe even a little embarassing to view our children as wanting to take control from us. The idea is a common punchline shared among parents, but it is the actual truth. Children want control and they will find it. Accepting this fact invites us to consider whether we have any say in the matter at all. We do -maybe more than we realize. The good news is that children are not masterminding a sinister plot to rise up against parent oppression. In fact, they don’t really want more control than they need. They simply seek balance and so do we.

Obviously, our ability to affect this balance relies on the relationship between giving and taking control. Of the two options, it might seem that taking control is easier. Afterall, any adult can take from a child but no one can give away what they do not posess. On the other hand, when things are out of balance, taking back control can be just as difficult as giving it. Never the less, whether giving or taking control, we must estalish and hold onto our own standards of what is appropriate and where the limits lie. Once we do that, our personal definition of balance is clarified. In turn, acheiving that balance actually becomes a more reasonable possibility.

To our children, the limits of their world are unknown and the only way to find them is through deliberate search. If you were standing in a room with your eyes closed, you’d want to know what’s around you. Where are the walls and the doors? You would walk the room with your hands in front of you. When you meet with an obstacle, your natural instinct would be to test whether it is passable. With your eyes closed, the only way to know for certain is to try. Whatever the result of your efforts, you will begin to remember where those objects are and whether you can get around them or not. That’s how you gain control and understanding of your world.

If we apply this analogy to your child, it is easy to see how inconsistent limits lead to confusion and can actually create real conflict. If the objects are constantly moving around the room, rather than trying to remember where they are, no one could blame the child for simply assuming that all objects must be passable. All limits can be pushed. That certainty of uncertainty can result in a wide spectrum of social/emotional difficulty; from social hesitancy/shyness to flawed decision making, impatience, lack of awareness and irrational confidence. However, when control is out of balance, the adult response is often not to focus upon the room, but to attempt to limit the child’s ability to search it.

The leash example highlights the point. Whether mom recognized it or not, the “room” that she had created for her child over time lead her to a point of last resort. In an attempt to take control in a very literal sense, she placed a physical limit by clicking the leash onto his backpack. In reality, the moment the leash was attached, so too was the child’s will to the parent’s, but not in the way this mother had intended. Clearly, the child still controlled where he went and when. All the leash did was confuse the limits further.

Where does all this leave us? Well, we’ve established that balance is important. We all seek it, but it is very difficult to acheive. On top of that, true balance is a fluid and ever-changing string of moments rather than a permanent condition. Human beings grow and the world around us changes so much over time that as soon as we begin to feel balance, it starts to erode. Inevitably, your child will gain more control and responsibility for himself both because of and in spite of your actions. But don’t focus solely upon those moments of balance because they may feel few and far between. Instead, look closely at the times of imbalance and learn from them. Not only will you find more room for improvement there, but you’ll be that much more prepared for those yet to come.