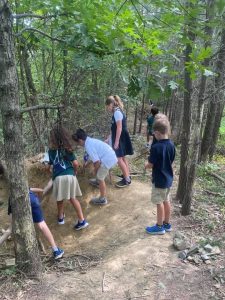 At MAB we’ve always valued our time outdoors.  We know that the organic, child-led lessons learned in nature run the full gamut of social and academic subjects in addition to physical and executive functioning skills. Being in nature is also one of the healthiest things a child can do.  We are fortunate to have about 2 acres of wooded green space on our campus. This year, COVID-19 provided the impetus to build a series of rustic nature trails for the students. The idea was to create an unstructured, but versatile environment to strengthen connection with nature, stimulate original, creative thought, physical activity and mask-free social interactions.  The results were immediate.  In just the first 6 weeks of school, it has already turned out better than we could have possibly imagined.

We began with nearly untouched woods where the only paths through the forest had been made by the wildlife with which we share our space. Once the children had fully explored the area from edge to edge, they created their own network of paths. They formed themselves into small groups or pairs and dug in the soil, climbed trees and balanced on fallen logs. They spotted a dozen different species of birds, identified plants, insects and small mammals along with the tracks of their predators.  Children lifted heavy rocks and branches and collected sticks, stones, fungus, seeds, leaves, acorns, moss, vines and other material. They slipped and fell, got wet and muddy, sustained bumps, scrapes, bruises and a healthy dose of splinters and thorns, maybe even a couple mild cases of poison ivy and insect bites.  Best of all, they felt the peace and connectivity of standing quietly in the woods, if only for a moment.  They may seem inconsequential, but these are such valuable, formative experiences and many of them are completely new for some of the students.

Then they began to create.  Clay art, sticks tied together with vines or dried mud.  They drew in the dirt and “painted” rocks with berries and mud.  They stacked stones into walls and kairns and hauled longer branches to create primitive lean-to structures, animal nests, see-saws, inclined and declined planes and the ever-popular “forts.”

Next, something miraculous happened. After only a few weeks in the woods, without any involvment from the adults and as if it was the most natural thing in the world, the elementary students had created an entire civilization with rules, jobs, elected officials and even an economic system. One of the most amazing parts was that every single student was involved and all of it was done with cooperation, generosity and consideration of individual and group needs. In those early weeks, the myth of “The Lord of the Flies” was dispelled and the innate qualities of children were revealed.

Sometime back in October,  as we were driving home from school, my son Robin, a 3rd year student, gave me an impromptu update on their progress in the woods. It started with a question. “Dad?” He said. “Why do we need currency?”  You know, the normal kind of question a 9 year old asks on the way home from school.  Having  a loose  idea of where he was headed and not wanting to draw the conclusion for him, I asked him what he thought.

He said “We use tree bark for money to buy things from each other, but people have realized there is so much bark in the forest they can just go and find as much as they want.  Now there’s too much bark for everyone and our currency literally grows on trees!” As I listened, it occured to me that I could not have created a better lesson on inflation or supply and demand if I had all the time in the world to do it.  Plus, I had to give him props for his comedic delivery. 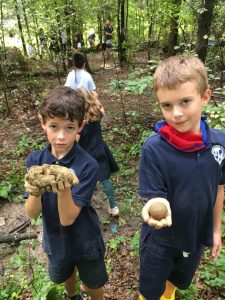 Robin went on to explain that there are two “shops.” in the woods.  A “pottery”, where children make clay bowls and art and a “blacksmith” where they craft wooden and stone tools.  The clay is mined (real life Minecraft!) by students who dig it up from the earth at the base of a fallen pine tree and the wood for tools is gathered throughout the forest.  After a while, a problem developed.  The children making and selling these items keep raising the price.  Some of the students were considering devaluing the bark completely in favor of something else.  They just hadn’t decided on a replacement.

“I don’t think we need currency.”  Robin said.  “What would you do without it?”  I asked, continuing the conversation.  He and his friends had thought of that.  “We would trade.”  He responded.  Then I asked what the blacksmith would want in return for a well-made tool instead of bark.  Robin said, strong sticks and sharp stones. Or maybe a clay pot.  Then we talked about how the blacksmith would pay for the materials needed to make the tools and he said that the miners could trade clay, sticks and stones for tools or pots.  Other services such as leaf collection and shop improvements could be traded for various items and so on.  Suddenly, Robin had discovered the barter system.  We finished talking at that point and as far as I knew that was the end of it. 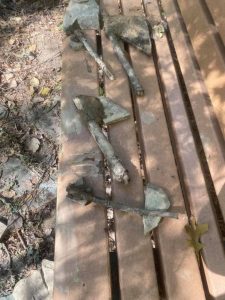 We decided to encourage the children to mulch the trails in the woods.  The children call it the “bucket brigade.”  We started with a large pile of mulch about 5 feet high and 10 feet wide.  Each child has a job, working in specific groups.  There are bucket fillers, bucket haulers, mulch spreaders and trail supervisors.  Over several weeks, the children have used nearly all the mulch to mark two distinct trails, temporarily called the “Outer Loop” and the “Inner Loop” -an ironic nod to the infamous DC Beltway.  Parents are welcomed to visit the trails with their children after school (who I’m certain would happily provide a tour).

About a week or so after our inflation conversation, Robin gave me another update on the woods.  It turns out that they have indeed established a barter system, although only a few people participate.  Others do their work for their own enjoyment rather than for external gain.  There was prolongued disagreement upon how to move away from a unifying currency and this gave rise to the need for election of a “supreme leader.”  I asked what the job description was and from the response, it seemed to be a bit of a gray area.  I also learned about a peaceful coup attempt which temporarily resulted in an additional supreme leader, although the faction was brief and remained civil throughout.  Most of the students seemed to change their allegience according to which leader was having the most fun. 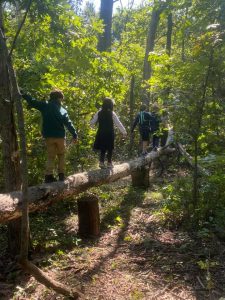 Today, daily life in the woods has developed into a comfortable and semi-orderly routine. If play is truly the work of the child (*spoiler alert* it is), then these children are working hard! Administratively, things seem to be moving toward a decentralized government system, but only time will tell if this new democracy has what it takes to make it through the most formative stages.  If we see anyone carrying a conch shell, we may consider offering guidance, but barring that, we trust the children to create their own cooperative and inclusive society and can’t wait to see all the lessons they learn along the way. If you have the chance on your way home from school, ask your child for an update!